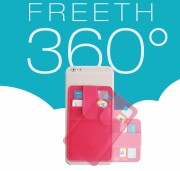 Freeth's new smartphone attachment accessories allow user's to attach smartphones or other portable devices anywhere, anytime, with a simple snap. Whether in the kitchen, the car, or even while riding a bike, attach and detach devices without the need for clamps or holders.

Seoul, South Korea, April 2, 2015 (Newswire.com) - Carrying around a smart device is inevitable in this day and age. Smartphones are used constantly and art a part of everyday life. As the smartphone market continues to expand, so does the accessory market. What is the one thing that people buy first after purchasing a smartphone? A case. Cases are used to protect smartphones from everyday wear and tear and as a way to dress up and personalize devices to match individual users’ tastes. The issue with having a case is that most cases do not allow smartphones to be used while still in the case. This applies to docks, stands, other types of cases like card wallets, etc. Those devices are normally meant to hold a single device and not the combination of a case plus a card wallet, dock, or stand.

Freeth 360 combines all of these devices into one. Freeth 360 uses a simple gel adhering coupling method that allows devices to be easily attached and detached to virtually anywhere. Freeth uses a simple male/female coupling method that snaps devices together and detaches just as easily. Simply place a male Freeth onto a smartphone and adhere a female Freeth to anywhere where a smartphone may be placed. Freeth can be used virtually anywhere. Use Freeth when cooking in the kitchen to watch a recipe video or a TV show. Or use it in the car to play videos for children sitting in the back. Or even while riding a bicycle to use a smartphones GPS navigation. Freeth can also be used as a GPS navigation in the car simply by adhering a female Freeth to the dashboard and snapping in the device. The 360-degree rotation design allows easy adjustment from portrait to landscape mode when using the device to watch videos, GPS navigation, etc.

Freeth 360’s line of products include a card case wallet that can be attached to the back of a smartphone, a wallet case to hold cards and cash while also protecting your screen, a car stand that attaches to your dashboard, a smartphone doll case with a storage pouch, or even a doll dock that will keep smartphones upright to use comfortably at home. The applications for Freeth are endless and do not apply to smartphones. The gel adherence is universal and can be used for virtually any device to stick anywhere. Because Freeth uses a gel adhering system, there is no sticky residue leftover when removing either the male or female Freeth and can be reapplied elsewhere for future use.

Plans to release a Freeth 360 smartphone case are also in the works. The smartphone case will have Freeth embedded into the back of the case to keep it flush with the case’s thickness while still allowing the easy attaching and detaching to your female Freeth’s have been applied elsewhere.

Freeth 360’s Indiegogo campaign has launched today and user’s will receive Freeth at a discounted rate during its crowdfunding campaign.

Get notified about new releases.